In Days Gone By

This book looks into the lives of certain Thornton, Tree, McKellar and Sykes families who settled in the Clarence and Tweed River regions of Northern NSW, in Brisbane Queensland and on Queensland’s southern coast. 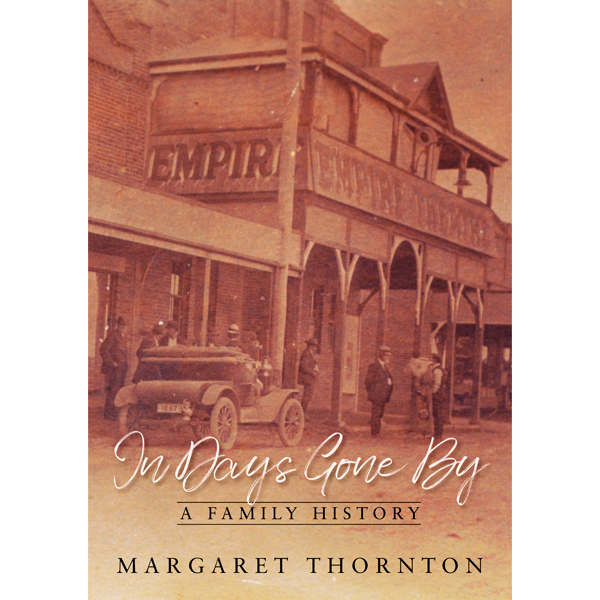 In Days Gone By, is a family history that ranges from England and Scotland to New Zealand and Australia and spans a period from 18th century through towards the end of 20th century. The book looks into the lives of certain Thornton, Tree, McKellar and Sykes families who settled in the Clarence and Tweed River regions of Northern NSW, in Brisbane Queensland and on Queensland’s southern coast as these were opening up and becoming populated. Their stories, though all very different, show that they shared a talent for hopeful perseverance as their lives were touched by tragedy, prosperity, adversity and sometimes poverty.

In Days Gone By stems from the author’s deep curiosity about the lives of her grandparents, their forebears and their descendents. Some lived, e.g., through ‘The Great Flood’ of 1893 in Brisbane, the ‘Great Depression’ in the 20th century and two World Wars. Though the story begins with two couples and two single young men venturing forth from ‘the old country’, many family branches sprouted. Possibilities abound that unexpected links to ancestors may be found here.

Brisbane born, Margaret Thornton spent her early childhood in Nundah and then from 1947 at Miami on the south coast of Queensland, in a region now known as City of Gold Coast. Educated at both Nundah and Burleigh Heads State Schools and then at Southport State High School, she gained a Licentiate in Theology from The Australian College of Theology in 1982 and a Master’s Degree in Distance Education from Deakin University, Geelong, Victoria in 1994. Upon leaving school she worked as a bank clerk then went on a 2-year working holiday in Britain. In 1967, after a period of study and training, she went to Kenya where she has worked in as a bishop’s secretary, diocesan book-keeper and administrator and has held various leadership roles in theological education by extension, including teaching, writing and editing books for publication. She spent over 30 years working with the Anglican Church in Kenya supported by the Church Missionary Society of Australia. This is her third book published since returning to the Gold Coast, Queensland in 2002.