“The One Between” is a romantic novel that draws heavily on the experiences of the author as a State Ward and as a pioneer of the Kalgoorlie gold rush. Written in the late 1930’s the manuscript was never published and forgotten for many years. The book takes us into the lives, loves and tragedy of two young women of the 1890’s against the backdrop of the Western Australian goldrushes. 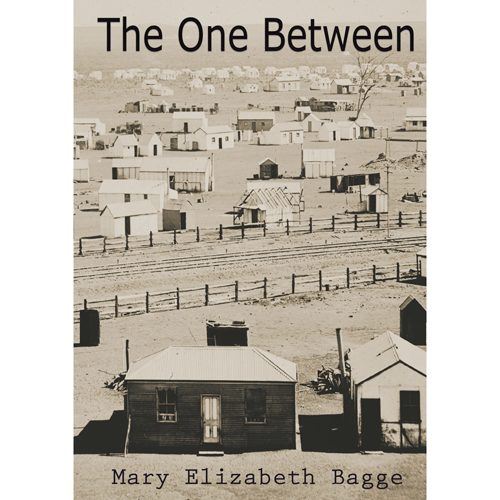 Mary Elizabeth Jane Bagge was a remarkable woman. Born at Hindmarsh, South Australia in 1875 she was six months old when her father left his wife and their two children. He was gaoled on two occasions for failing to maintain his family. In 1876 with her mother in gaol she was declared a neglected child and together with six year old brother Henry, ‘sentenced’ to the Magill Industrial School in Adelaide until she was sixteen.

In 1878, at the age of three, Mary Elizabeth Jane Bagge was adopted out to Mr George Jones, a lime burner, of Nailsworth, South Australia. During the next nine years she was sent to another four homes at Truro, Clare, Hilton and Mt Pleasant; on most occasions she was returned to Magill for misconduct and on one occasion for being suspected of being of ‘unsound mind’. When her fostering subsidy expired in 1887 she was then sent out on licence (domestic service) to a further five homes, again being returned each time for misconduct, until her final placement on a farm near Wilmington. She was released from her licence in 1892, just before she turned seventeen.

Working conditions were harsh for a young child and she clearly rebelled against it. Despite the fact that she was supposed to go to school until she was twelve, records indicate that she had only three years of formal education.

For a while her brother visited her in Magill and once gave her the only gift she ever had as a child. She cherished that book all her life. Henry was also licensed out, absconding twice from his employer. Mary lost contact with him and despite searching all her life she found no trace of him.

In 1896 she travelled to the Kalgoorlie goldfields where she established a laundry with another woman, later working at the Kalgoorlie Steam Laundry. In 1900 she married Alfred Charles Bradshaw, then a tailor’s assistant who later became Chief Inspector of Factories in WA. She reared five children, the first two born in a tent, the third in a house in Boulder. In 1906 the family moved to Perth where a daughter and a son were born.

In 1923 with proceeds from a lottery win, Mary bought an orchard at Chidlow which she developed with her sons Roland and Arthur. However, the venture failed and she returned to Perth in 1927.

This book was probably written in the late 1930s and although a work of fiction it reflects Mary’s personal experience as a Ward of the State. Her arrival in Western Australia and experiences on the goldfields, from its beginnings as a tent city to a sophisticated metropolis, is at least partly autobiographical.

Mary died of a heart attack on 23 December 1948 without her book being published. It is now being published to honour a remarkable woman who overcame hardship, an absence of family love in her childhood and a lack of education with a determination to be her own woman.