Making Them Real – Finding a Queensland Past

This book tells the stories of several families of Queensland pioneers as discovered by two of their descendants. The result is a hybrid of family history, military history and memoir. 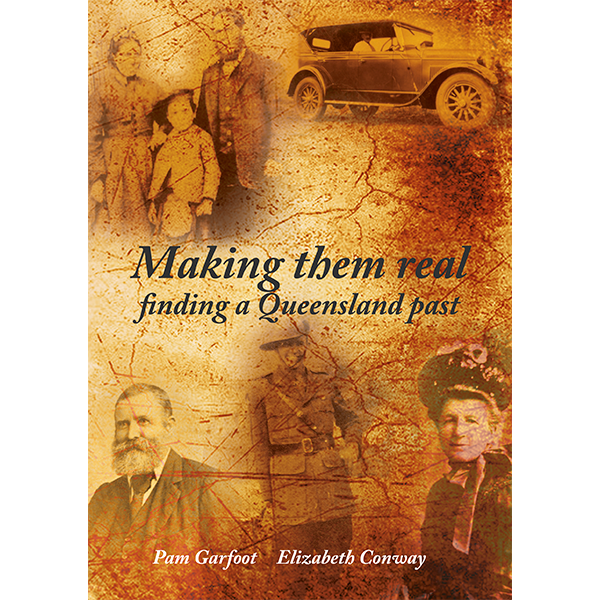 by Pam Garfoot and Elizabeth Conway

After the death of their father two sisters embarked on a voyage of discovery, searching for the story of their father’s family and its beginnings in Victoria and Queensland.

Using a newly discovered diary written at Gallipoli by their grandfather in the Australian Light Horse in 1915, they built a picture of him at war, both there and later on the Western Front. Further, they brought alive the story of his grandfather who emigrated with his family to Australia in the mid-nineteenth century following a career in the Hussars, but who was unable to find fulfilment in anything he did. The book also includes the saga of another two families and their trip to Queensland on the infamous City of Brisbane voyage of 1862, and the tale of a young man who fled an unhappy home life in Warwickshire to begin a new life with a new identity.

The authors' research throws light on the history of policing, land selection and pastoral activities, mining and goldfields, provisional schools, midwifery, and other aspects of Australian pioneering life.

What the authors present is more than just historical fact and biography. The book is written partly as a memoir, with several streams of narration and with explanations of how they came to uncover their family’s history. It includes photographs, maps, and charts that help to bring the stories to life.

The book describes how, in the process of researching and writing the tales of their forebears, the authors found new skills and passions, delightful friends and previously unknown family members, and unearthed stories that were sometimes painful to discover. But there was acceptance, too, for everything that was revealed contributed to making them who they are and also to the making of Australia.