Researched and written by Robert Mares and published posthumously, this rich history draws on RAVC official records and numerous recollections from interviews with contemporaneous Corps personnel. It extends the history of the RAVC building on the earlier volumes written by Brigadier John Clabby and by Major-General Sir Frederick Smith. 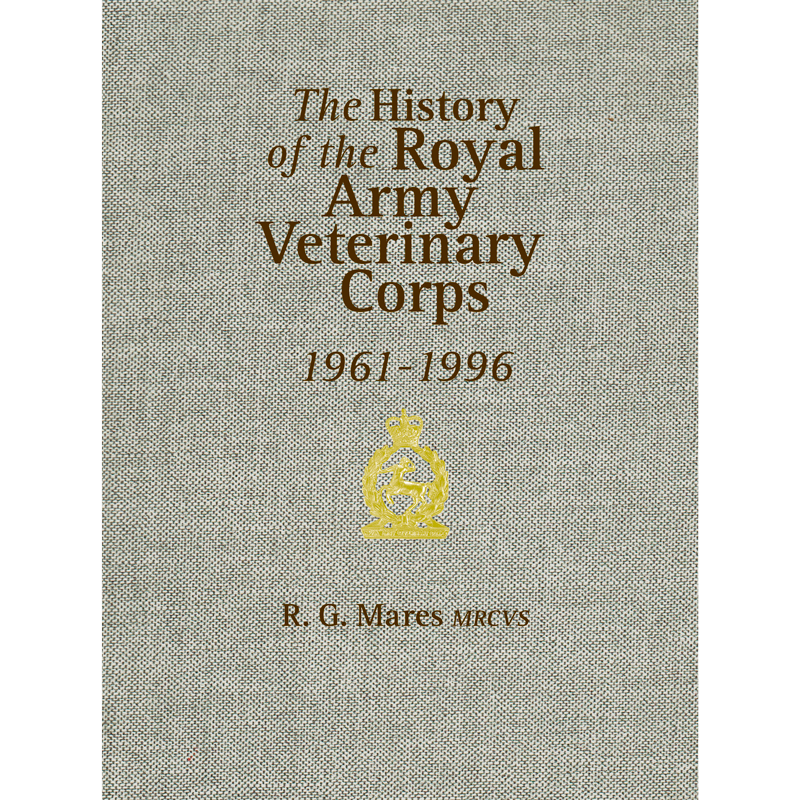 Robert Mares was a distinguished veterinary surgeon who had a life committed to public service.  He graduated from the Royal Veterinary College London in 1941 and served with the RAVC in the Middle East from 1944 to 1946. After a career in countries across Africa under the auspices of the Foreign and Colonial Office and latterly the UN’s Food and Agriculture Organisation, Robert completed, in retirement, a degree in History at the School of Oriental and African Studies. This equipped him with skills to bring an RAVC history to fruition.

The history he presents is in two parts. The first provides a chronological account of RAVC activities from 1961 to 1996 including conflicts in Cyprus, Malaysia, the Falklands and Northern Ireland. The second describes individual functions of the RAVC, covering army dogs, horses and other animals. This part also discusses how the Corps has adapted and remained relevant to changes of modus operandi of the broader British Army and societal expectations in general.

Each chapter begins with a description of the contemporary political context surrounding RAVC activities in British Army engagements. The book includes a comprehensive general index, index of names and lists of abbreviations to aid the casual reader and researcher alike. The appendices give complete coverage of RAVC organisations, serving personnel across all ranks, RAVC chronology and supporting bibliographies.

The book’s foreword is written by the RAVC Chief Veterinarian and Remount Officer, Colonel Mark Morrison QHVS, who notes that the narrative gives a real sense of some of the variety that a career in the RAVC can offer. He recommends the history to anyone with an interest in the vocational exploits of veterinary surgeons, and as essential reading for RAVC veterinary officers. The book will also be a valuable and interesting text for anyone wishing to understand how the RAVC, and veterinary medicine and military working animal capability in the round, has evolved to remain relevant to a modern military.

Those who have a copy of Brigadier Clabby’s The History of the RAVC 1919 -1961 will find the hard back version of Robert Mares’s 1961-1996 volume complementary in presentation and dimension.