The Man Who Hunted Whales

This book tells story of Captain Robert Clark Morgan and the last voyage of the whaling ship Duke of York, from February 1836 to 1838. Robert Morgan had been charged with transporting British emigrants to Kangaroo Island, off mainland South Australia. 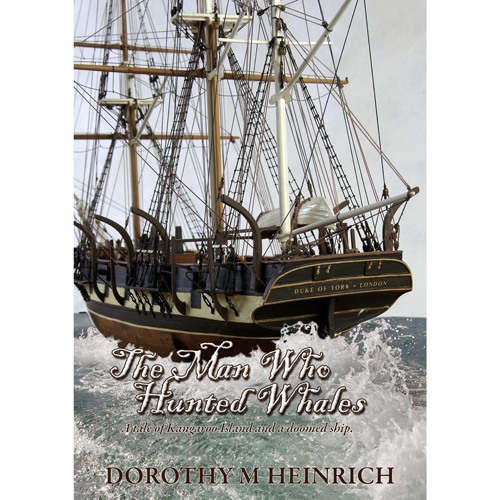 The Man Who Hunted Whales: A tale of Kangaroo Island and a doomed ship
by Dorothy M Heinrich

This book tells story of Captain Robert Clark Morgan and the last voyage of the whaling ship Duke of York, spaninng the two year period from February 1836 to February 1838. Robert Morgan had been charged with the duty of transporting British emigrants to Kangaroo Island, off mainland South Australia, and then sailing to the Pacific whaling grounds. Whale oil was to underpin the economy of the fledgling settlement.

The story opens with the departure of the Duke of York from London as one of a succession of ships carrying aspiring settlers to the new colony of South Australia. When, at the end of an incident-filled voyage, the thirteen emigrants of the Duke of York landed at Kangaroo Island, they discovered that they were the first to arrive. As such, they became the first official settlers of South Australia. They soon realised, however, that the island was already the home of men who had come ashore from whaling and sealing vessels to live in its wilderness with their Aboriginal women. The early days of settlement were bedevilled by drunkenness and disorder.

Upon departure of the Duke of York from Kangaroo Island and the replenishment of supplies in Hobart Town in the penal colony of Van Diemen's Land, Robert Morgan sailed his vessel through the Tasman Sea and north-east to Samoa. The Pacific islands were a feast of temptations and delights. Men deserted, and the whale hunt proved perilous. At Pleasant Island (present-day Nauru) the island's population was living under the control of convict escapees, and an attack was launched by the islanders upon the Duke of York.

Ever in the pursuit of whales, Robert Morgan sailed to New Ireland and the Solomon Islands, and then turned his vessel south through the Louisiades. Discrepancies in his charts placed the ship in dangerous waters and early one morning, the Duke of York struck a reef and sank in the Curtis Channel, off the Queensland coast. In just three boats, the crew began the three hundred mile journey to the Moreton Bay convict settlement. During their ordeal, two crewmen were murdered and one boat became lost.
Robert Morgan and the other survivors eventually reached the convict settlement at Moreton Bay, from where they were taken south to Sydney.

Based on the account of the ship's log, this book gives a candid insight into the journey of one of South Australia's little-known early pioneers.