An WWII story of an outstanding body of fighting men from most highly decorated unit of the Second A.I.F as told by one of their number. 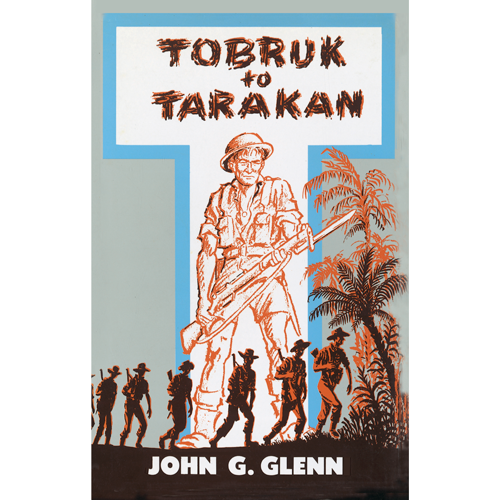 TOBRUK TO TARAKAN is the most stirring book to arise from the Second World War. This new edition has been released in recognition the 70th anniversary of the El Alamein campaign.

The most highly decorated unit of the Second A.I.F. was in action in so many campaigns that a great deal of the drama of the conflict as experienced by Australian soldiers is encompassed in one volume. They went through the Hell of Tobruk, blasted their way to El Alamein and stalked through the rotting jungles of New Guinea and Tarakan where a Japanese with a machine gun seemed to lurk behind every tree.

This story of an outstanding body of fighting men is told by one of their number, John G. Glenn, who shared in all these experiences and was himself mentioned in dispatches. He describes the day-by-day experiences of his comrades on foreign soil, the welding of plain Australian men into a ruthless ﬁ ghting machine, the heroic deeds of many, highlighted by the exploits for which the Victoria Cross was awarded to such men as Kibby and Derrick, whose names will never be forgotten while courage and gallantry under fire continues to be honoured.

Yet Tobruk to Tarakan is not only the story of bloody battles and dangerous sorties. It is relieved throughout by flashes of that sardonic humour which is traditionally associated with the Australian fighting man. It is a book which gives colour and fire to our history and every Australian who reads it will hold his head a little higher… for these are his countrymen…

300 pages softcover. ONLY A FEW COPIES LEFT! FEATURES SIGNATURES OF SOME OF THE SOLDIERS PRESENT AT THE BATTLE.